Jonathan Rea pulled off the surprise of the day in first qualifying at Phillip Island as the Honda World Superbike man put in the only sub-1m32s lap in the last couple of minutes to head the field. Rea’s time of 1’31.959 put him in front of three Ducati men, who had dominated the session until then. Second place went to Jakub Smrz on the Liberty Racing machine, followed by Superstock 1000 winner Davide Giugliano (Althea Racing) in third and Carlos Checa in fourth. The Italian rookie actually led at one point.

Max Biaggi (Aprilia Racing) was next up in fifth place ahead the Red Devils Roma Ducati of another rookie Niccolò Canepa, while the final two places on the provisional second row went to the two Kawasaki Racing Team riders, Tom Sykes and Joan Lascorz.

Joshua Brookes (Crescent Suzuki), Lascorz, Checa and Maxime Berger (Effenbert Liberty) all went off during the session, without any consequences, while Eugene Laverty (Aprilia Racing) again crashed, picking up a bump on his head, but was declared fit.

Leon Haslam bravely took to the track to see how he felt on the BMW and completed a few laps – quite a feat after an operation only yesterday! 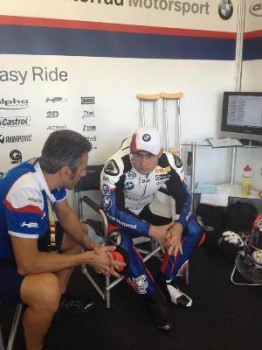